Jewish and Roma women had their heads shaved upon entering the death camps during WWII, and more than a ton of this hair remains at Auschwitz where it is slowly turning to dust. In my work for the Intimate Transgressions exhibition, hair is strewn around the remnants of sheets and mattresses. Human hair is juxtaposed with a projection of a woman’s abstracted legs and genitalia that float over and onto a distressed sheet on the floor. The reduction of the female body to dismembered and mute body parts underlines the destruction of identity, physical security and agency experienced by Jewish and Roma women during WWII.

This work was also inspired by the story of SS Oberscharführer Josef Schillinger, who was shot and killed by a young woman, possibly a dancer, in the undressing room of the Birkenau camp gas chamber on October 23, 1943. An essay by historian Kirsty Chatwood explores a version of this story in which the young and beautiful dancer seduced the SS guards by undressing provocatively, then grabbed their guns while they were distracted.

I decided to incorporate overhead and wall projections of a partially-undressed woman shooting upwards at the viewer to acknowledge that even in the most horrifying of circumstances women’s sexuality is not only about victimization. It can be a survival mechanism, a weapon and a source of empowerment.

The ghost of a woman who bravely attempted to use her sexual identity to survive  haunts the installation. Though not seen in the video, after murdering the two Gestapo officers, the dancer was immediately shot and killed. 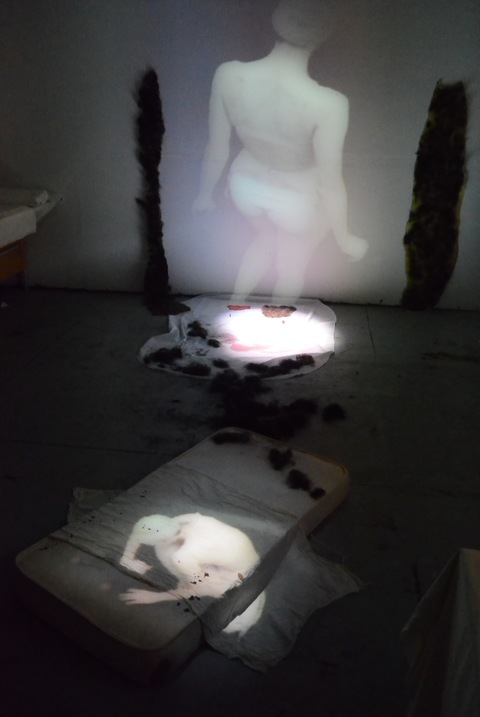 SCHILLINGER AND THE DANCER

SCHILLINGER AND THE DANCER
Mixed media

Photo by Lou Lanzman
SCHILLINGER AND THE DANCER, NYC, 2015